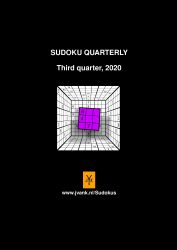 Sudoku weekly contains a Sudoku for each day of the week. Sudoku weekly is only available as a downloadable and printable pdf file. Downloads are for free. The week presently available is Week 3, 2021.

July 2017 was the first month in which all Sudoku’s in the booklets were Magic: Each Sudoku contains one or more gray blocks. In the solution, these gray blocks should also be magic. This means that each row and each column should add to 15 and all nine digits should occur. Each week, the Sudoku on Monday has one magic block, the Sudoku on Tuesday has two magic blocks and so on. On Sunday all blocks are magic.

The Sudoku’s are generated using a computer program written in the programming language of the statistical package R. The results are written to LaTeX files which can readily be printed in the proper layout. The system was developed by Herman Adèr.
At first, the magic Sudokus in Sudoku weekly only contained at most three magic blocks, but, starting in Week 26, 2017, all Sudoku’s are Magic.

In the Netherlands:
Third quarter (2018)